How ’bout those Chiefs 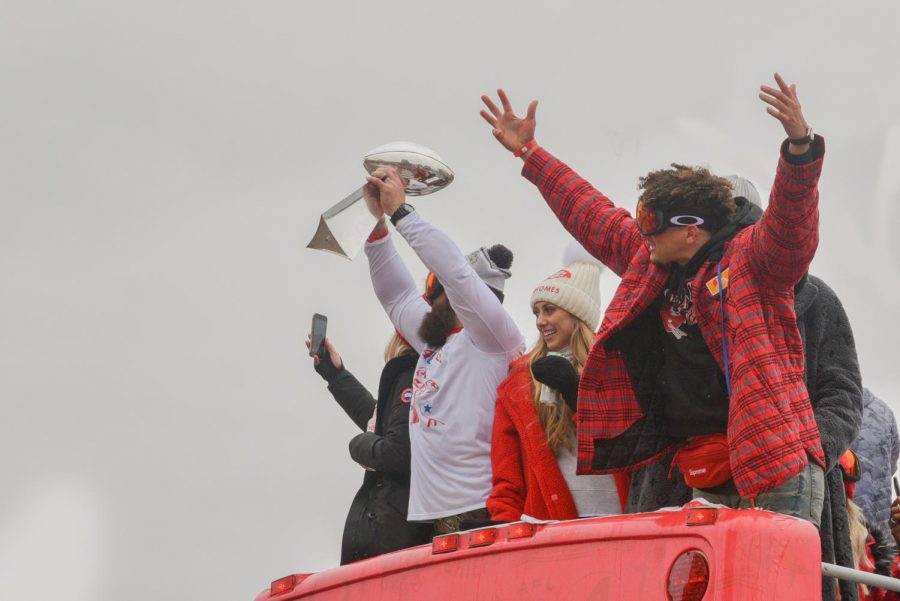 In 1970, the Kansas City Chiefs won Super Bowl IV. Since then, it has been an uphill battle for the Chiefs. Seasons went by without even making it into the playoffs. Last year, they made their way to the American Football Conference Championship and played against the New England Patriots, but lost 37- 31. This year, the Chiefs had a chance at taking the Lombardi trophy home after 50 years and with a fourth-quarter comeback, they did. Students and faculty were over-the-top with excitement and district administration made the big decision to cancel school so students could attend the parade on Feb. 5.

Kansas City, Missouri is notorious for its fan-filled stadium, Arrowhead. This year the Kansas City Chiefs defeated the Tennessee Titans, 35-24, meaning they earned a one-way ticket to Miami, Florida where they faced the San Francisco 49ers in Super Bowl LIV. Chiefs fans at LHS all had a hope that the team could finally win the Super Bowl.

Students voiced their predictions for the big game.

“In the last two games the first quarter hasn’t been our strong suit, but I hope the climate of Miami will have them coming out strong in a nice, warm environment,” senior Chase Wilhelm said. “I hope we come out strong and hit them right in the beginning.”

Freshman Jenny Campbell has the same hopes for the Chiefs but thought they just needed a strong second half.

“I think in the first half we’ll drag a little bit, but once it gets to the second half we’ll have a comeback,” Campbell said.

Sophomore Naysha Blackwell thinks the game will be a tough one but the Chiefs had the chance to get a win.

“It is going to be a hard game,” she said. “The 49ers have a really good defense, but the big strength of the Chiefs is when Patrick Mahomes and Travis Kelce work together.”

Wilhelm agreed, expressing that while he believed in his team, they had to fight for the title of champions.

Math teacher Matt Kiser remained strong in his belief that he would be able to see the Chiefs win the Super Bowl for the first time in his life.

“I believe the Chiefs will win because we are the best team in the NFL and we have the best quarterback in the league,” Kiser said. “I expect them to win 33-27. The biggest weakness to overcome will be the running game of the 49ers. Mahomes will lead us to the first Super Bowl in my lifetime. Nobody is talking about Butler. He could be the wildcard in this game as he is one of the premier kickers.”

The Chiefs won Super Bowl LIV with a score of 31-20. After ending the first half tied 10-10, the 49ers took the lead in the third quarter, leaving the Chiefs fan biting their nails in anticipation. In the fourth quarter, with seven minutes on the clock, the Chiefs scored a touchdown and got the field goal. Chiefs player, Damien Williams, scored the winning touchdown leaving the Chiefs in the lead and leaving them to run the down clock.

Throughout the game, there were memorable plays that stuck with fans. One was Patrick Mahomes’ 44-yard pass to Tyreek Hill with over six minutes left in the fourth quarter. Another was the play that left the 49ers circling after the Chiefs did a 360 spin and scooted down the field.

“I think one of the most memorable was when Patrick Mahomes juked on them,” Endaya said. “That was really exciting. When we got a touchdown and it was under review, they called it as a touchdown and left the call on the field alone. That was so exciting and people were crazy when that happened.”

Though the game ended well, many fans were struck with anxiety during the third quarter.

“I was on the edge of my seat, but I trusted the team,” Campbell said. “I didn’t give up on them, I thought we’d have a comeback and we did.”

“I was down but I think it was the environment, everyone was feeling down,” she said. “But I still kept my faith in the team.”

With 57 seconds left on the clock, the Chiefs knew they had won the Super Bowl. They dunked Head Coach Andy Reid in orange Gatorade and started cheering. Once the game ended, the team, coaches, and the owners of the Chiefs, the Hunt family took to a stage where they were given the Lombardi trophy and where Patrick Mahomes was announced as MVP.

Wilhelm thinks he deserved the title.

“I think he deserved it from an overall standpoint,” he said. “I don’t disagree with him getting MVP, he did a great job there at the end. He’s a good kid and he’s done really well for the Chiefs.”

Chemistry teacher Jill Endaya has been on the Chiefs’ drumline for nine years. She auditioned during her freshman year at the University of Missouri-Kansas City because the school didn’t have a marching band and has stuck with it all this time.

“I absolutely love it,” Endaya said. “I forget how cool of an opportunity it is until I’m standing on the 50-yard line at Arrowhead. It makes me really grateful.”

She was at the playoff games at Arrowhead and basked in the joy from the team and the fans..

“The best part of being on is performing during halftime,” Endaya said. “But there are way too many good memories to count, all of the playoff games have been really fun. The crowd is wild.”

When the Chiefs made it to the Super Bowl they took some of the drumlines, but not all.

“I was seriously one person away from getting to go to the Super Bowl,” Endaya said. “They only took five members and since I play snare like some of the other members, they decided to go with a bass drummer and cymbal player instead. Oh well, next time.”