Keenan talks about her passion to perform on stage. 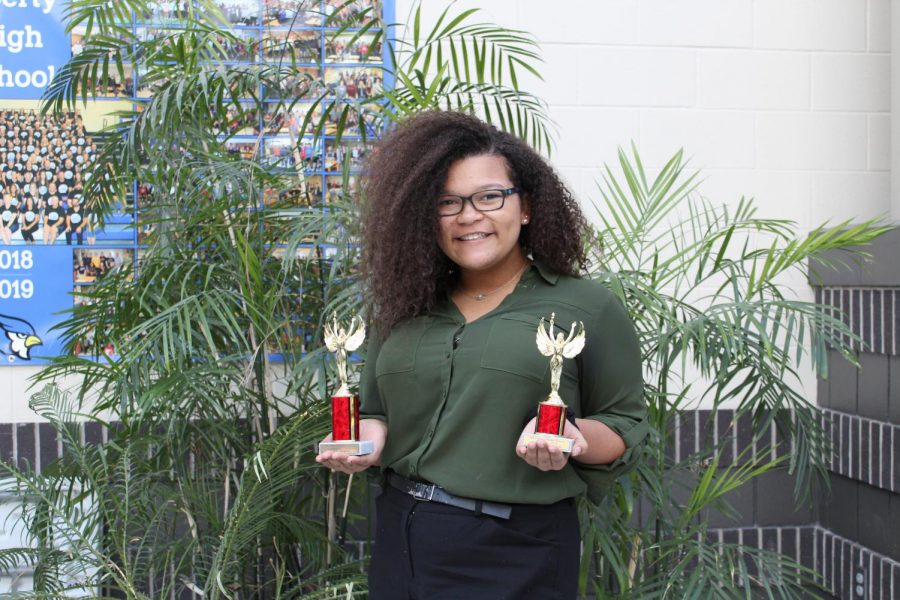 The hum of the audience and curtain in place indicate it’s show night. Sophomore Ciara Keenan is waiting for the sign to go out and do what she loves.

Keenan found her passion for performing at a young age. When Keenan entered middle school, she finally got to show the school what she loved to do.

“When I was in fourth or fifth grade, I realized I wanted to do shows,” Keenan said. “When I got to the sixth grade they had auditions the first week and I’ve kept with it.”

Keenan performed in every middle school show and last year she was part of the ensemble in “Mamma Mia.”

“I think ‘Mamma Mia’ was my favorite show,” Keenan said. “It was a really big cast with people I hadn’t been around in a few years and new people from my grade and the grades ahead of me. It also allowed me to make a lot of friends who are still here and have graduated.”

Keenan’s theater teacher, Mick Turpin, has good things to say about her work.

“Her mindset is to get better every day,” Turpin said. “She is constantly coming to me for suggestions or questions on how to analyze her current literature pieces, her speeches and how to improve her delivery style.”

Keenan’s proudest moment comes from speech and debates this year.

“The first tournament of the season I was a fill-in debate partner and I got the case the day before, learned basically the whole thing and
I hadn’t debated in a year and a half and we actually got third in the tournament,” Keenan said. “Then I also got third with my Humorous Interpretation for the speech side.”

After finding her love for debate, Keenan found there was more that pushed her to succeed.

“My team motivates me the most because they encourage me and I can encourage them,” Keenan said. “Being part of a group that had succeeded before and continues to succeed, that motivates me.”

Keenan has goals she’d like to accomplish in speech and debate as well.

“For speech and debate, I really want to get first in something,” Keenan said.

Keenan is trying to become a valedictorian by the time she graduates.

“I would really like to be a valedictorian,” Keenan said. “It’s kind of always been my goal. I’m very academically inclined.”

Besides speech and debate and theater, Keenan is always trying to be better. Sophomore Mallory Chapman considers Keenan a dedicated person and a great friend.

“I love how she’s one of the funniest, sweetest, kindest, most genuine people you’ll ever meet,” Chapman said. “She’s always helpful and if I’m ever somewhere in need, she’s always there.”

Keenan and Chapman have been friends since eighth grade and have gotten closer since.

“She’s special because she’s so genuine and she truly cares,” Chapman said. “If I came to her with any problem, she’d actually care.”