Rogers shares her passion for gymnastics. 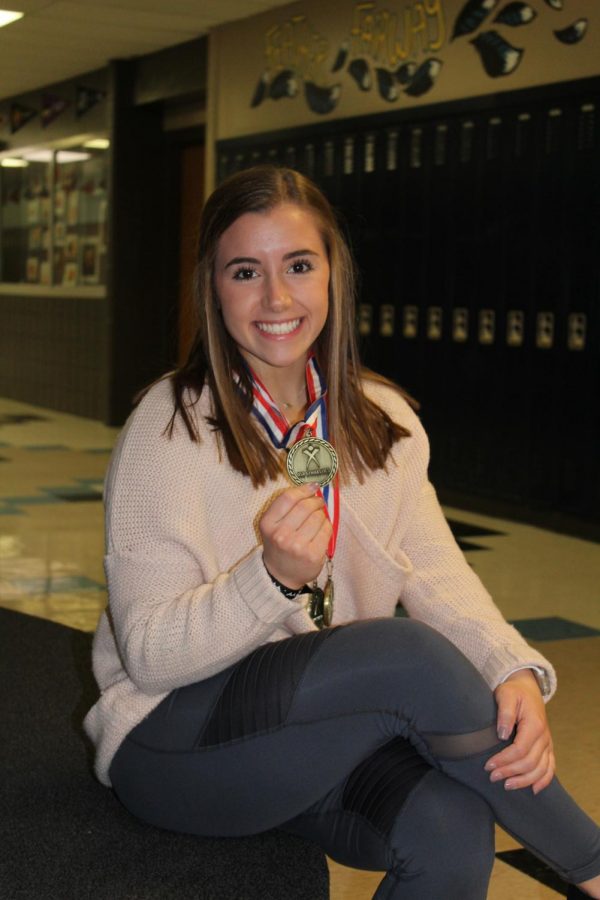 Performing in front of hundreds of people can seem intimidating, but the adrenaline rush only pushes senior Claire Rogers to perform her best at State and Junior Olympics Nationals.

Roger’s main focus outside of school is gymnastics. She has done gymnastics for eight years and is a part of Fusion Gymnastics.

“I do all four events so that means vault, bars, beam and floor,” Rogers said. “My favorite to compete in would have to be vault.”

Although Rogers has faced setbacks from injuries, she is working hard to rebound and she is hoping to compete this year.

Rogers has received many awards for competing for gymnastics and has accomplished so much within her eight years.

“I won State every year that I’ve gone through for Missouri,” Rogers said. “So level five through my first year of level 10 I’ve won all-around and individual events. When you get to level 10, you make it to Junior Olympic Nationals and I made it my first year on level 10. That was definitely my proudest moment.”

Between having many achievements for school and gymnastics, Rogers always makes sure others have a positive attitude.

“Even though we just became friends this year, we have a strong friendship,” junior Ally Pilsl said. “I feel like she is easy to talk to and you can go to her for anything.”

Rogers uses her happiness and a positive attitude to make everyone’s day brighter.

“I feel like a lot of people, especially in our school, are in bad moods and I feel like if they are happy their day will be better,” Rogers said.

Being involved in activities and clubs within the school has helped her grow academically.

“Claire is kind, motivated and committed,” Kleinmeyer said. “She works hard at all that she does, whether it’s completing schoolwork, planning an assembly, or competing in gymnastics. Claire perseveres and doesn’t let things keep her down.”

Many schools have already been looking to recruit Rogers for gymnastics.

“Right now I’ve been talking to colleges for gymnastics and it’s between Mizzou, Arkansas and Minnesota,” Rogers said.

Kleinmeyer has high hopes for Rogers.

“I have no doubt that Claire will go on to do amazing things,” Kleinmeyer said. “Her genuine kindness, positive attitude and overall zest for life lead me to believe wholeheartedly that she will chase after her dreams and accomplish them while helping others along the way.”