A recap of a high scoring game of the Rock Bridge Bruins versus the Liberty High School Blue Jays. 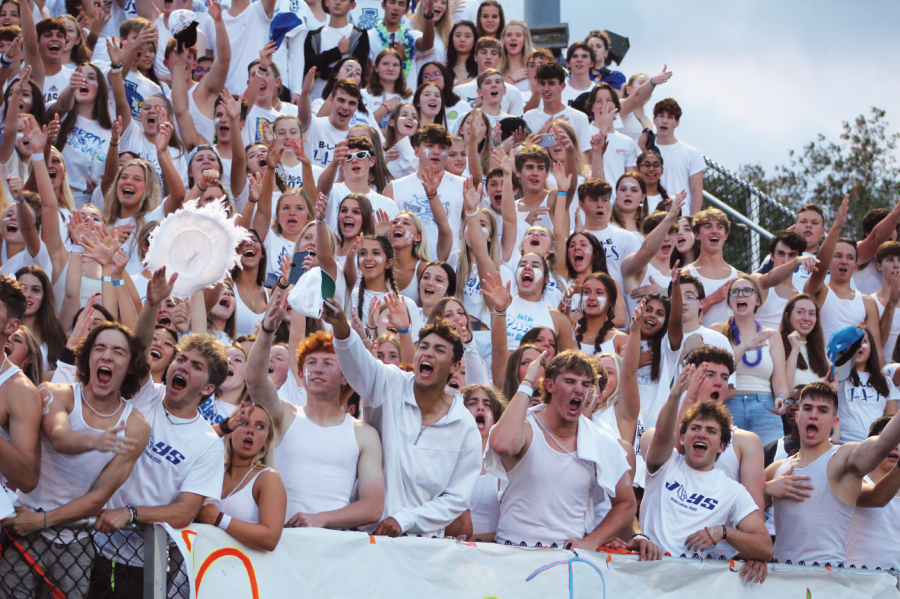 The Jays’ offense hit the ground running; at 8:48 in the first quarter, senior Tyler Lininger completed a pass to senior Caden Dennis for a 48 yard touchdown. The kick after by senior Lucas Porter was good. The Jays led 7-0.

The Bruins wouldn’t stay on defense for long. With the Jays starting their drive at 5:40 left in the first quarter, Lininger would complete a pass to junior Anthony Wenson for a 81 yard touchdown. The kick by Porter following would be good,  pushing the Jays up to a 14-0 lead.

The Jays would start their next drive at 4:15. Senior Wentric Williams III would run for 32 yards, and on the next play would run again for an 8 yard touchdown.

The first quarter ended with a 21-0 Jays lead.

At 11:23 in the second quarter, Williams III would run for 35 yards scoring a touchdown with a successful kick by Porter after. 28-0, Jays.

In the following drive, the Bruins would get their first points on the board with a completed pass to senior Case Newton for a touchdown. The kick by junior Jack Bower was good putting the score to 28-7.

With 46 seconds left in the 2nd quarter, junior Ricky Ahumaraeze would score a 14 yard touchdown with a good kick by Porter after. 35-14.

With sizable yardage gains by the Bruins throughout their next drive, Bower would complete a 23 yard field goal attempt with no time left. The score was 35-17 at the end of the half.

The Bruins started off the 3rd quarter strong with sophomore Sam Kaiser completing a pass to Messer for a 66 yard touchdown. The kick by Bower after was no good. 35-23.

After the kick off, Dennis would outrun the Bruins for a 99 yard return and touchdown with a good kick by Porter after for the Jays. 42-23.

On the Jays’ next drive they would have trouble breaking through the Bruins defense. Despite this, Porter would make a 30 yard field goal attempt, adding three more points to the Jays lead. 45-23.

The Bruins were unsuccessful scoring on their next drive. As soon as the ball got back to the Jays, Williams III would make a 70 yard run for a touchdown followed by another successful kick by Porter. 52-23.

The Bruins would score a 65 yard return for a touchdown by senior Nate Norris followed by a good kick from Bower. 52-30.

Within the next drive, the Jays would add more points to the board with a 59 yard touchdown from Dennis followed by, yet again, another good kick by Porter. The third quarter would end with a score of 59-30.

There was no scoring during the fourth quarter. The game finished with a score of 59-30, Jays.

“We’re trusting each other more,” Ahumaraeze said. “For next weekend we need to focus on playing together as a team.”

“We were really efficient on offense,” head football coach Chad Frigon said. “We were really taking advantage of what the defense was giving us and we were able to complete some passes in the beginning that opened some run lanes for us.”

You can catch the Jays Friday Oct. 8 at 7:00pm playing Park Hill at Park Hill.