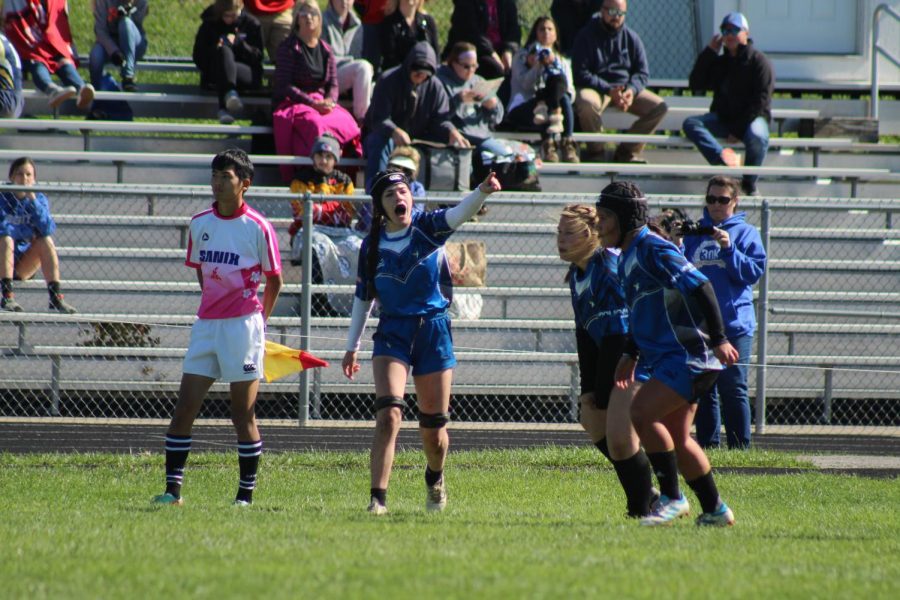 There’s one thing you need to know about this team: they are family.

The idea of being family isn’t just this one team, it’s the whole rugby community in Missouri.

“Everyone is such a close-knit family,” senior Maddie Marwitz said. “It doesn’t just stop at just our team, teams all around Missouri, guys, and girls, we are all one big family.”

“My favorite part would be the community and everyone on my team. We have so much fun playing the game,” Berry said.

To anyone thinking about joining rugby, you won’t just be joining a team, you’ll be a part of a loving family.

Practicing three times a week has helped girls rugby make it all the way to fourth place
in Missouri.

“Our season is going really good,” Marwitz said. “We matched really close to a team that is really difficult to beat. We ended up beating them more than any other team in Missouri.”

“I think our season is going pretty good. Our main goals are to always have fun and that’s what our coach always tries to instill on the team. We’ve had two tournaments so far and comparing our second tournament to our first one, the improvement that I’ve seen within our team has increased. I can only see it going up from here,” Lundy said.

Everyone on the team is looking forward to going to the state. The state is at Lindenwood University in Saint Charles, Missouri.

With all of their hard work paying off, you would think rugby would be a school sport, but instead, it’s considered a club sport.

“I definitely believe it should be a school sport, but it’s not really our call. MSHSAA is the one who makes it a sport and we are regulated now but we need fifty teams in Missouri to be considered a sport,” Marwitz said.

There’s one huge disadvantage to not being an official school sport. The school doesn’t give funding to club sports.

“Since we are only a club, the school doesn’t support it financially. We have to raise our own money and we have to sell our own fan shirts to gain money so we can go to state,” Berry said.

The team is putting all of that aside and is only thinking about having a fun and successful season as a family.

“It doesn’t matter who you are, where you came from, or your background, everyone on the team is going to love you for who you are,” Marwitz said.

“My advice is to work really hard for your goals and to really show your positive attitude because a bad attitude makes a bad teammate. It is important for an athlete to show lots of sportsmanship and a lot of support for anyone around them and not just for themselves.”

Teammate Jenna Berry
“Maddie always has a smile on her face and even when she makes a mistake or she’s learning something new she always tries to stay positive. I look up to Maddie because she’s a great role model for me and younger teammates on the team.”

Coach Tracey Davies
“Maddie doesn’t slow down. She is full-on all the time and wants to build her team and her future in the game. When she sets her mind to it, she can be unstoppable. Maddie was excited to come out last season and try something new and it showed. We work hard to build a positive team culture and Maddie seemed to thrive in that environment and she embraced rugby, finding where she truly fit.”