Senior Showdown competitors reveal what it means to bring it 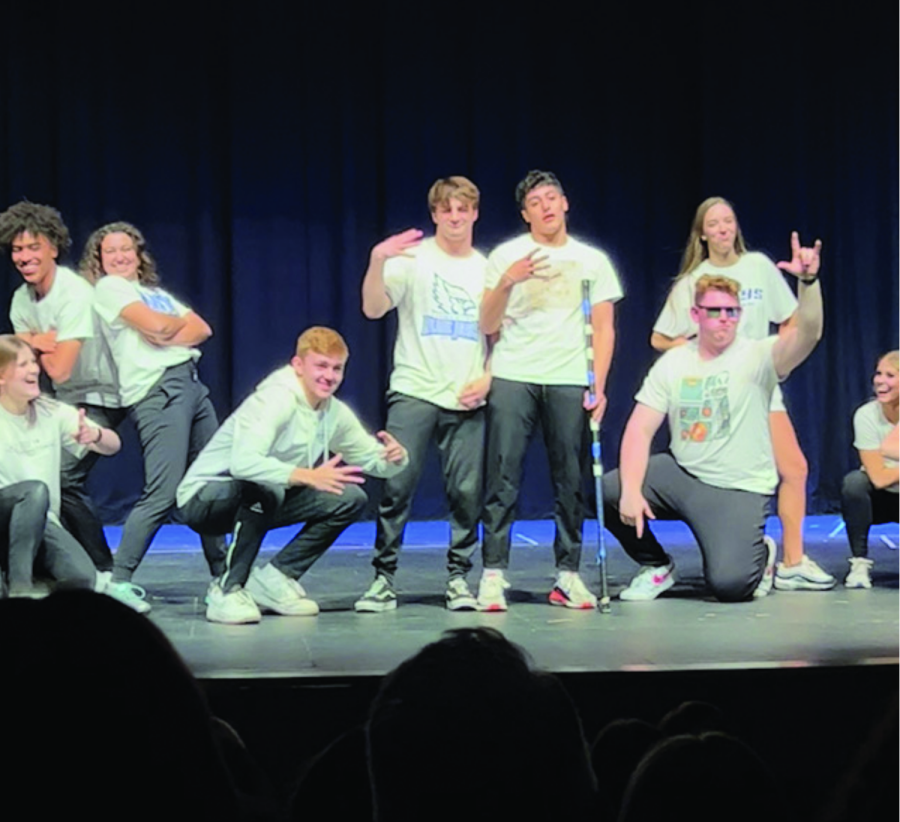 On Wed. Apr. 6, 11 seniors (Spencer Blaine, Jay Briones, Catharine Duncan, Emily Graham, Sasha Hough, Maya Klemme, Kennedy Naseem, Logan Rathjen, Kellen Reeve, Patrick Sheeley and Kymon Warman) made their way onto the Performing Arts Center’s stage to participate in the 1st annual Senior Showdown, hosted by seniors and StuCo members Delaney Harmon and Lucia Umbreit. The event was described by StuCo on their Instagram account as “a friendly, but fierce, competition.” The purpose was to raise money for community scholarships via the $5 tickets required for entry.

The hour-long competition was organized into a total of five rounds: Club and Organization Wear, Formal Wear, Interview Question, Talent and Surprise Tie-Breaker. The two winners received $25 gift cards for either overall competition or the audience-chosen Bright Shiny Star.

The show opened with the competitors performing a choreographed dance number to “Throwback” songs in matching costumes. After the group performance was over, the contestants introduced themselves individually and the department they represented. Many of the participants enjoyed cracking jokes during their segments, including Rathjen who used his platform to convey a message important to him.

“I’d like to thank the girl in the Cane’s drive thru,” Rathjen said. “I do want extra ketchup.”

The talent portion of the showdown was met with a wealth of applause from the audience. While Duncan played “Mary Had a Little Lamb” on a recorder with her nose, Hough rapped “Ice Ice Baby” while writing out 68 digits of pi from memory.

At the show’s conclusion, Sheeley was announced the winner of the Bright Shiny Star and the audience’s favorite competitor. Duncan’s overall competition award was chosen by a panel of five teacher-judges (Erin Ramsey, Jordan Moree, Kara Geisert, Amy Ahard and Ali Smith). While the two winners won’t be at LHS for the 2022-2023 school year to reclaim their titles, current juniors wanting to participate can check their emails for more information next year.