Students describe their encounters with racism and xenophobia during the pandemic.

Racism is the belief in superiority of one race over another, also discrimination or prejudice of a race or ethnicity that is not of the majority. Similar to xenophobia, which is prejudice against people from other countries.

“The racism or xenophobia is more than likely surrounded by fear,” Counselor Trilaina McCallum said. “When people are in the midst of confusion and a lot of unknowns are present, it can have the tendency to increase fears. With fear, people are often looking for a person, or a reason to help make sense of the unknown, which often results in pointing fingers at others.”

The racial finger-pointing is what some LHS students have either heard, witnessed, or experienced themselves. Several students describe stomach churning incidents of outright racism or xenophobia occurring in multiple public places. 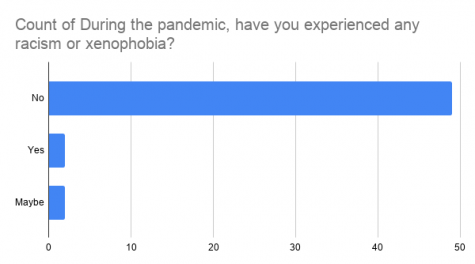 “I was in Walmart and overheard people talking about how the only reason we are on lockdown was all the Chinese people coming to America,” senior Savannah Christensen said.

Another student overheard xenophobic comments being made.

“[I heard] people saying things like “get away from them, they have the virus” just because they’re Asian,” senior Morgan Hecker said.

Two out of 53 students report to have heard racially insensitive or xenophobic comments in the comfort of their own home, or amongst their friends.

“Someone I know said Italians spread the virus because ‘they are all handsy and always touching each other’,” junior Jillian Hough said. “[I also heard] several people, including the president, calling it the Chinese Virus.” 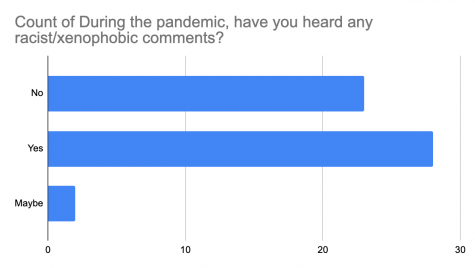 Three out of 53 students say they have heard their high school peers, or other students that attend LHS, making racist comments.

Another student claims to have been talking to a classmate when that student made an insensitive comment about another.

“They said, while pointing to an Asian student, “It’s all your fault,” freshman Bianca Jackson said. “At the time, we were talking about the rate of people getting the coronavirus and the chance we might be out of school.”

Twenty-four out of 53 students professed to have seen inappropriate memes, videos, or other forms of expression on social media. Many described what they saw as “slurs” or “a lot of things [they] can’t say.” One student specified a commonly seen comment from social media.

“There have been issues with people online being verbally abused by people saying that Asians should go back to their country,” sophomore Alicia Romanowski said. 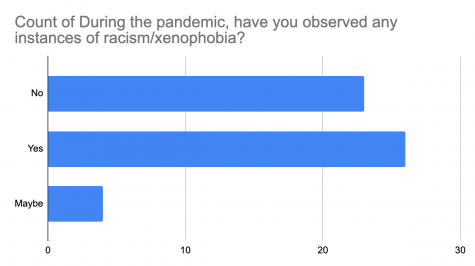 Another student supported what Romanowski claimed to have seen on social media.

“On the media there are a lot of comments saying “go back to your country” towards Asian Americans,” junior Kayden Alderman said.

Each of these testimonies are examples of what many Americans are subjected to everyday. People can help stop the targeting of others, and the first step is simply being aware of the harm it causes, so you can identify it when it happens.

“Being able to be aware of your own biases is crucial in being able to recognize your comments to others,” McCallum said. “It takes intentional effort and a lot of self reflection. It also requires one to be open to feedback from others without taking offense.”

Another way you can combat targeting behavior is by using four strategies which will help you speak up effectively.

Interrupt (taking a pause, or stopping whatever has just happened, or was just said).
Question (investigate why the person said what they said, or did what they did).
Educate (engaging in conversation and explain why what was said may need to be rethought).
Echo (having another’s back and supporting them in their speaking up against bias).

How will you help terminate the racial targeting that is affecting Americans everywhere?

For more information, or other references, please look at the articles linked below: